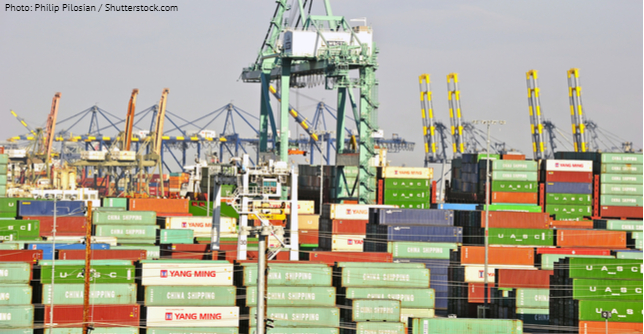 The U.S. Federal Maritime Commission remains on schedule to deliver the final report of recommendations from its demurrage and detention investigation, known as Fact Finding 28, by Dec. 2, said Commissioner Rebecca Dye.
“We have some of the very best people in the commission working on this,” she told American Shipper in a telephone interview Tuesday.
The interim report, which was released in early September, identified six areas for improvement to how demurrage and detention is assessed by ocean carriers and marine terminal operators:
• Transparent, standardized language for demurrage, detention and free-time practices;
• Clarity, simplification and accessibility regarding demurrage and detention billing practices and dispute resolution processes;

The FMC report’s recommendations aim to ease the long-festering problem related to when and how demurrage and detention charges are assessed against shippers by marine terminals and liner carriers.
Shippers long have contended that ocean carriers and marine terminals use these fees not only as a punitive measure to combat excess free time but as revenue generators. The problem came to a head during a period of intense congestion at U.S. West Coast ports in late 2014 and early 2015 and also in the aftermath of Hanjin Shipping’s bankruptcy in August 2016.
Twenty-six trade associations formed the Coalition for Fair Port Practices and filed a petition in December 2016 calling on the FMC to adopt rules to clarify what constitutes “just and reasonable rules and practices” for how demurrage, detention and per diem charges are assessed. This action eventually was followed by two days of public testimony before the commission in January during which numerous shippers and ocean transportation intermediaries complained of mismatched fee assessments by ocean carriers and marine terminals that make it difficult for them to avoid.
The FMC commissioners concluded that further investigation was warranted and on March 5 initiated a fact-finding investigation into the conditions and practices related to these fees. Dye was put in charge of Fact Finding 28. She solicited further information from 23 ocean carriers, 44 marine terminals and numerous shippers and ocean transportation intermediaries, as well as drayage providers, during the past six months to develop the findings for the interim report.
A couple of weeks after the interim report’s release, Dye announced that she would conduct a set of field interviews at three port clusters around the U.S. — Everglades and Miami, New York and New Jersey and Los Angeles and Long Beach — which she dubbed “phase two” of the fact-finding investigation.

She conducted the first set of field interviews last week at the ports of Everglades and Miami.
Dye said most of the interviews, which lasted about an hour each, were conducted with the port directors and senior management of the terminal operators in the two Florida ports. “It allows for a good, robust give-and-take,” she said.
She also said the interviews allowed the commission to further emphasize that the purpose of the fact finding is not to interfere with existing commercial agreements between marine terminals and their carrier customers or service contracts between beneficial cargo owners and the carriers, but instead bring clarity to the industry practice of demurrage and detention.
Dye believes that one of the key outcomes from the fact finding will be recommendations regarding the notice of container availability. “A lot of people do that already in different ways and for different purposes,” she said. “We’ve had a lot of positive feedback on how to make that work.”
Dye will have a “full slate” of interviews in the Port of New York and New Jersey regarding the fact finding Wednesday through Friday. This will be followed Nov. 14 to 16 with interviews in the ports of Los Angeles and Long Beach.

Dye told attendees at the Association of Transportation Law Professionals’ Transportation Forum XV Monday that “addressing demurrage and detention concerns benefits from active participation of industry leaders — particularly, but not exclusively, liner companies and marine terminal operators, who want to address their customers’ concerns.
“I appreciate the many industry leaders who took the opportunity to give us the information we need and have engaged with us in a cooperative way,” she added.